Nordic Investment Partners was founded in 2017 by Ole Søeberg

Based on Ole's experience in global equity markets since early 1980's in investment banking, Investor Relations and Asset Management and in various leadership roles.

Nordic Investment Partners functions as a family office. However, being a long term investor there's time for other activities and the following advisory services are offered

Advisory and consultancy is provided within

2023 has started on a bullish tone despite media and experts saying we're heading straight into a recession.

Time will show how reality is by summer 2023. Assuming a moderate economic slowdown, which cool down the inflation numbers, then central banks will continue to maintain activity reducing short term rates (current levels are 4.5% in USA and 2.5% in Europe) until inflation is sustainably at the targeted 2% inflation level

In such an environment corporate performance should be OK and given the current valuations of 17x in USA and 11x in Europe, then there's room for a continued bull run. However, valuation levels change much faster than earnings and the valuation level in US could hold back the magnitude of the US bull run.

Based on the expected sales and earnings in 2022-24 one can make a simple illutration that suggest the roadmap as below. If it's mild recession it's not going to get much worse than now and we should be thru by summer 2023. If it's a deep recession it's take until 2025-26 to get back to the levels of late 2021 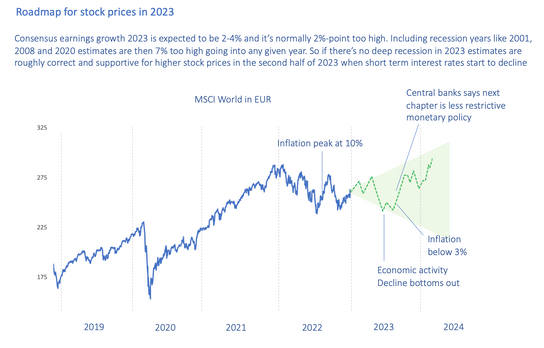 Fell free to reach out via the boxes below: